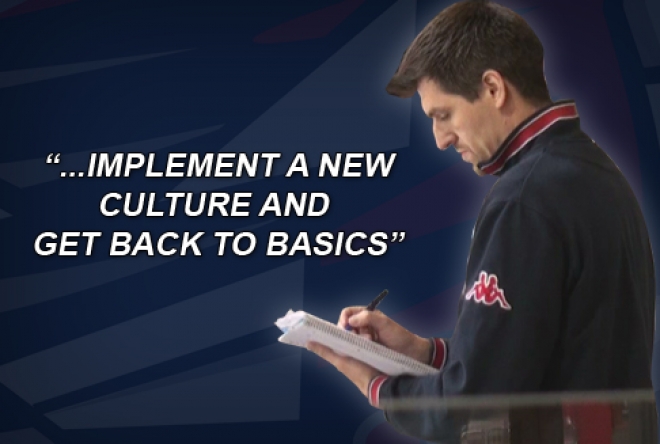 The regular season is now over, and we took the opportunity to talk to coach Yves Barthels about this season's accomplishments, progresses and mistakes, but also about the upcoming World Championship in South Africa.

First of all, you took over the team on the 16th of November 2010 after the Tornado Luxembourg had lost five out of five games. What needed to be changed first in your opinion?

It was all about confidence. The reason why the team had a bad start to the season was it’s mental state of not being able to cope with stress situations. If you look at the game sheets during the losing streak, most games were decided in short stretches of anywhere between 3 and 10 minutes. A couple of goals, and the team completely lost its rhythm and focus. For me, getting back that focus and the fun aspect of the game back into the players’ heads was the most important. I clearly remember my first words as head coach just before game 6: “You can win! Don’t let anybody tell you that you are a bad team and that you cannot win! If you believe in yourselves, you will win!”. This resulted then in the team’s first and only win of the season and the effect lingered on, despite the losses after that.

Even though you got a few very strong additions to the lineup, like Philippe Lepage (G), Colm Cannon (C), Marian Gallo (D) and a few more, the Tornado Luxembourg ended up on the last spot of the standings during the regular season. What went wrong?

Hockey is not about individual players, it’s more about the mindset of a whole team. The first five games kind of blew the whole season for us and my main goal was to get the confidence back into the minds of the players to prepare for the Division III World Championship in April. I hadn’t given up on the possibility of making the playoffs of course, but it was an uphill battle. The win and the tie in the first couple of games gave us back the hope that we had lost, but let’s be realistic here, it was a long shot to make the playoffs. The game against Metz, the team that went on to win the Group C with just one loss in 12 games showed the resilience of our team and the willingness to fight. We lost 11-1 in Metz (one of the first 5 games), but held Metz to a 5-8 score at home (with the last goal being an empty-netter at 59:59) while leading at some point in the game. Penalty trouble probably cost us that game. The schedule was not an easy one either as we had to play the strongest teams in the league on the road towards the end of the season. And then the infamous game in Chalons where we led 6-0 after 25 minutes and 10-6 after 50 minutes and we ended up playing most of the game on the penalty kill, including 5 (!) 3-on-5 situations (with 65 penalty minutes) to lose the game 11-12 in the end with a reduced roster. It was a heart-breaker and as a referee myself I never speak ill of referees, but in that game, we did get ripped off and that denied us the chance to make the playoffs. So all in all, the second half of the season probably did not go as well as it could have gone, but the team found its way back to a good level of hockey and I have a lot of respect for the players because of that!

The team was beset with many injuries, forcing you to go without some of last season's top-scorers, like Benny Welter (C), Robert Beran (LW) and Georges Scheier (RW), for a remarkable number of games. How much did this affect your results?

I don’t think the injuries dragged us down as much as that. If you looked at the games against Chalons or Compiegne or even Metz, we played with a reduced roster and still had a good showing. Yes, we did not win those games and we might have been in a better position with the injured players, but the players that were there did a very respectable job and deserve a lot of credit for it. Injuries are part of the game and you cannot use them as an excuse for not winning games or having a bad season. So I am not going to do that.

When making the comparison between last season's roster and the one from this year, one can note that you were playing with a very different lineup. What was better and what was worse this year?

The core of the team has not really changed. Players like Robert Beran and Benny Welter, Patrick Schon, Ronny Scheier and Francois Schons still make up that core and drive the team. The good thing is that we start building a stronger team around that core and that the “ageing” players (and I won’t say any names here) will have a more reduced role in the future, their contribution is still valuable, but will not be as essential any more. The younger players like Thierry Beran, Kai Linster and Gilles Biver as the Luxembourgish players, but also the foreign contingent of Fred Olsen, Magnus Jaansaker and Colm Cannon have made and will make huge contributions to the team. Next year, we will get the next generation of Luxembourgish players into the lineup as players like Bob Schneider, Sacha Backes and Phlippe Bechthold have already practiced with us all season and played the Alter Domus Luxembourg Cup. Getting Marian Gallo back on defense was also crucial for the late-season success. All in all, we have completed the roster with elements that we needed rather than replaced it. There is much more speed in our game and the toughness has also increased. I like the prospects and am certainly looking forward to developing the team around the values of a good hockey club. The biggest question mark we still have is around our goaltending. Gilles Mangen has left to study in France, Michel Welter is out indefintely with health problems and Philippe Lepage will certainly be looking for a club in a better league next season. Philippe has been instrumental this year and I was happy to be able to rely on his services. I am not too worried though as I liked what I saw from young goaltender Sven Linster this season. He has made huge progress and even though he hasn’t seen much playing time with Tornado, he has done a good job at the U18 level this season.

What are the major changes that you want to make for the upcoming season in order to improve the results?

I don’t think there are that many changes needed. We have started towards the end of the season to implement a new culture and to get back to basics. The new season will be built around the values that I call essential for every hockey club. Winning is about sacrifice and only team effort can help you achieve success. There are a few basic elements of the way we play and train that need to be changed, we have started working on that. Good teams in the NHL build their success on the transition game and net presence. These concepts are still pretty unknown in our ranks, so I will make it a priority next season. We had glimpses of it in the Chalons game where good execution of those two basic concepts led to an easy 6-0 lead within the first 25 minutes. I also want us to be a puck-possession team. It is much easier to hold on to the puck, win face-offs and carry the play into the offensive zone than to play the old dump and chase and basically chase the puck all the time.

As we all know, you are currently also the head coach for the Luxembourgish National Team, which is going to attend the World Championships in South Africa in April. How well are your national players prepared at this point, and what can you reveal about the lineup so far?

This is a State secret. Haha! Only 4 weeks to go, I can’t believe how fast the championship approached. I think the team is pretty well prepared. We still have to figure out some lineup issues and get the younger players involved, but all in all, I am pretty confident about our chances. The team spirit is good and players have strengthened their bond over the season. The world championship is often less about skill and more about heart and determination and I am pretty sure that’s what we will see again this year. The championship will be tougher though this year as the teams attending are of a much better quality. Teams like Israel, South Africa and Turkey will be tough to beat, but we will do our best to bring at least a medal back home.

Last but not least, which place do you expect to take in South Africa?

As I said before, we like our chances and even though the opponents are probably a bit stronger this year than last year, we will fight for a medal rank. I don’t want expectations to be too high and increase the pressure on the team. Realistically, we should be able to finish at least 4th in the tournament, but let’s see whether we can beat the odds and achieve a better result.

Do you have one more thing to say?

I think it is important to express our gratitude towards our fans who have been loyal to us again this year and have been there with us, despite a challenging year. We did probably disappoint them in the first half of the season, but tried to make up for it with a couple of exciting games towards the end of the season, so hopefully they won’t let us down like we let them down. It’s always fun to play in front of the home crowd and all of us, coaches and players, certainly appreciate being home and being able to entertain our fans.

Thanks also go to our sponsors who have shown faith in us and extended their loyalty.

Thank you for the interview.