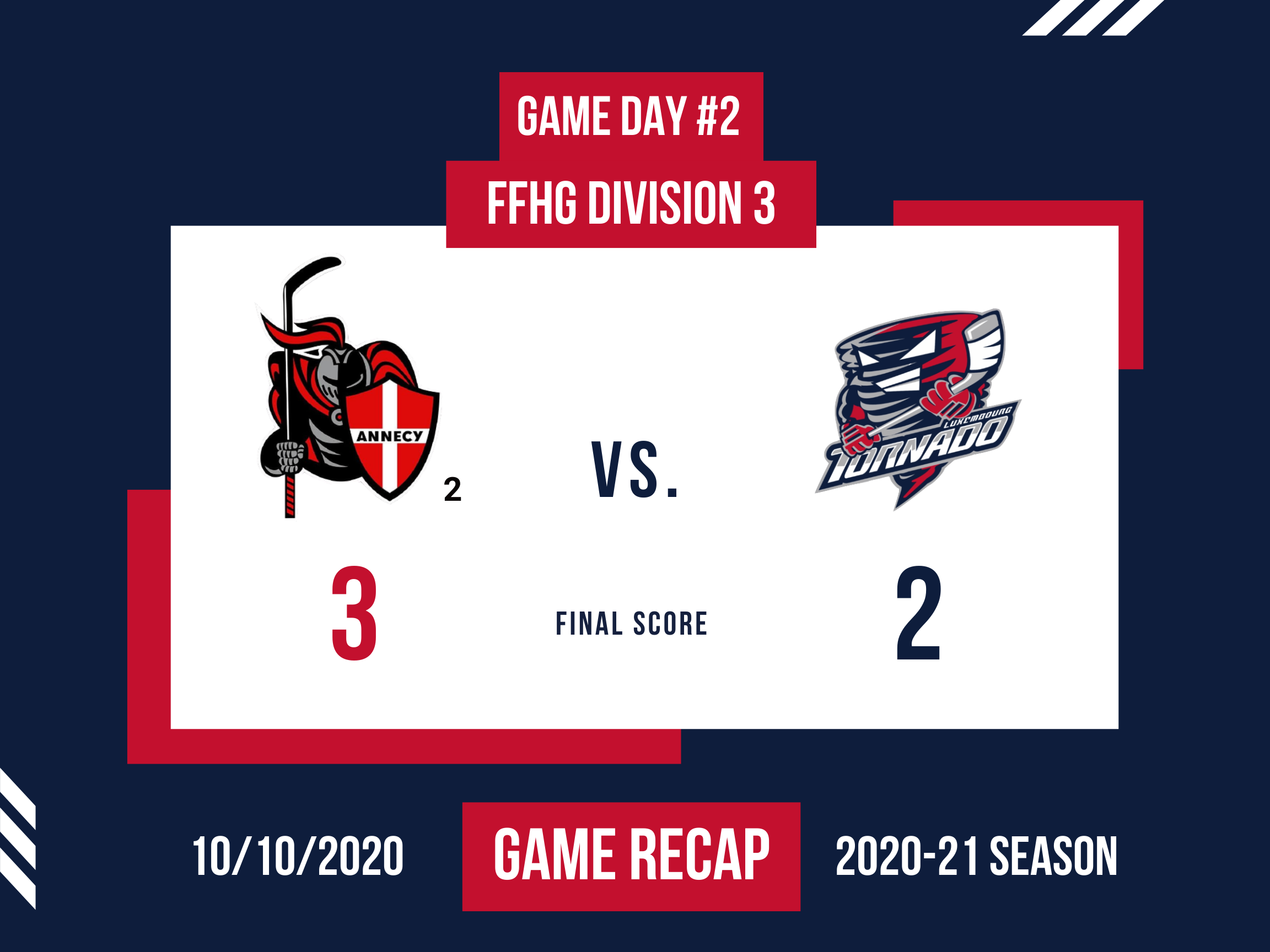 Last Saturday, 10 October, Tornado traveled to Annecy for the first away game of the 2020-21 season. At Patinoire Jean Régis, the Divison 3 squad of Les Chevaliers du Lac (Annecy 2) was awaiting the team from Luxembourg City to play against each other for the first time ever.

Although Tornado showed an improved performance compared to the loss in the home opener against Étoile Noire de Strasbourg 2, the team also lost its second game of the new season by one goal - the final score being 3-2 for Annecy 2.

With Annecy 2 being a new opponent in Group C of the FFHG Divison 3, it was not easy for coach Petr Fical and his team to fully assess the home team before the first puck drop.

Tornado started the game out strong, showing Annecy 2 that the long bus ride (seven hours) would not be used as an excuse for anything that day. Young forward Vlad Shelest scored the first goal of the evening, making it 1-0 for Tornado halfway through the first period.

Both teams played an offensive game at eye level with plenty of scoring chances in the first 20 minutes - but also lots of penalties on both sides. A concerted effort by all lines and an excellent Philippe Lepage in goal secured Tornado’s lead while killing several power play situations (including a 5-on-3) for Annecy 2 before the first intermission.

Too many penalties destroyed Tornado’s rhythm

The game continued with numerous penalty calls by the referees. Unfortunately, this caused Tornado to lose its rhythm and focus in the second period, resulting in two goals against after another 5-on-3 and 5-on-4 power play for Annecy 2.

Trailing by one goal, Tornado was determined to turn the game around in the third period. Captain Colm Cannon and his team fought hard in front of the goal and in the corners, playing with lots of intensity on offense and defense. Nonetheless, Annecy was the team to score again first, making it 3-1.

In the final minutes of the game, coach Petr Fical pulled the goaltender to add another attacker on the ice. This tactical move paid off when Colm Cannon scored on the man advantage shortly before the end. Tornado tried everything to tie the game in the final minute but did not manage to do so after all. With a final score of 3-2, Annecy 2 got its first three points of the season.

After the game is before the first LHL game

Without a doubt, Tornado could have won this game - but, unfortunately, the team beat itself by taking too many penalties. Hence, the lesson learned after this second game of the season is obvious, even though it is not a new one: Playing with discipline and staying out of the penalty box are prerequisites for success in the short and long term.

The next chance to get the first victory of the 2020-21 season is already coming up this Tuesday (13 October) when Tornado and the Luxembourg Puckers meet for the inaugural game of the newly founded LHL (Luxembourg Hockey League).

IMPORTANT NOTE: The game will take place in the smaller rink (practice area) at Patinoire de Kockelscheuer. Due to the COVID-19 safety rules, no spectators are allowed to attend in this location. We apologize for the inconvenience.

Make sure to follow the social media accounts of Tornado and Puckers to get live updates from the game.