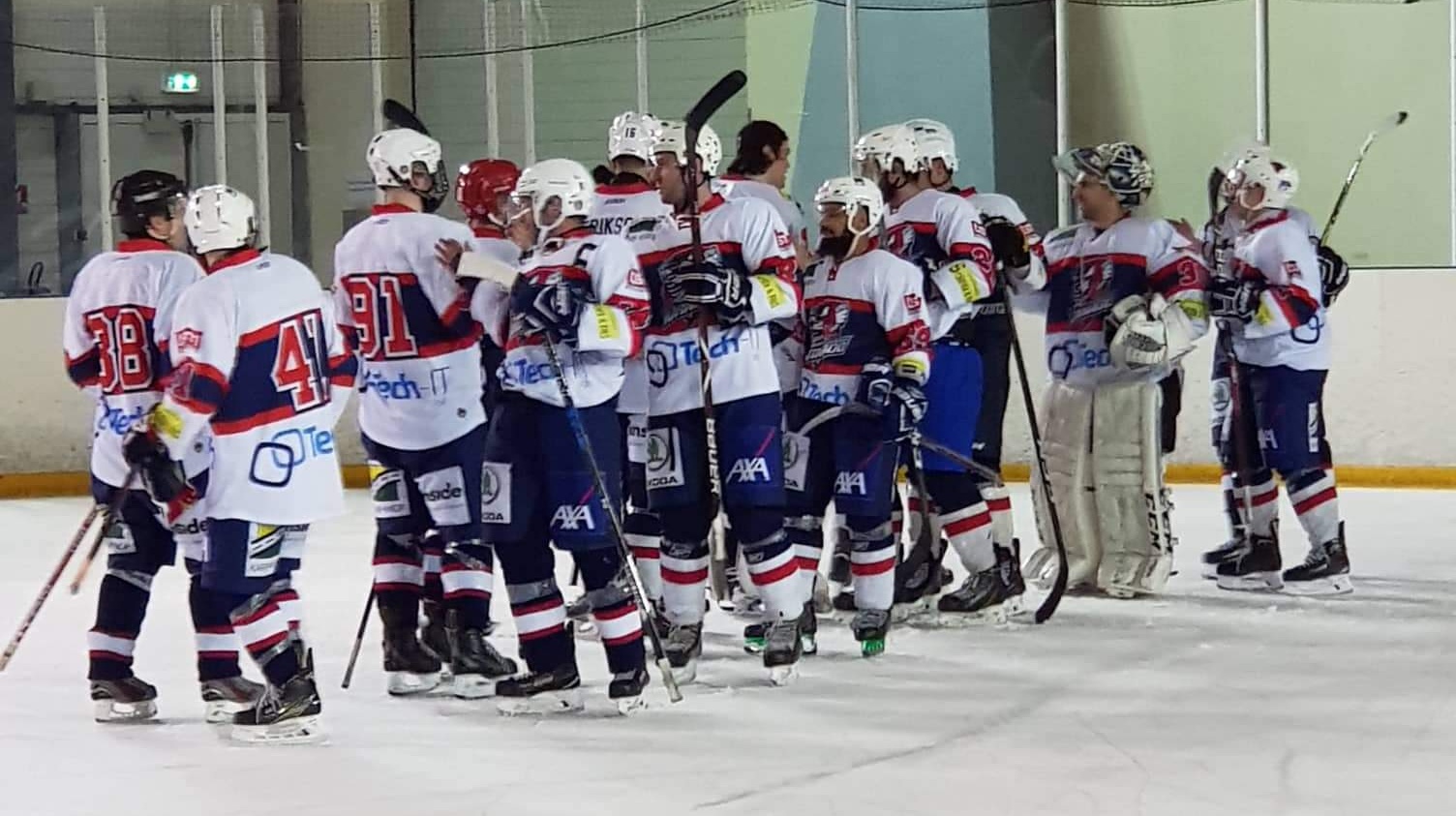 Tornado started the year with an important 8-5 win

For the first game of the year, Tornado travelled to Dammarie Les Lys to challenge local Caribous who was 2nd in the group. Tornado was 4th, 6 points behind Dammarie.The ice was not done between warm up and the first period. The arena in Dammarie is very nice complex but a bit hot. Because of that the ice in the first period wasn't as good as could be. This lead to the fact that puck control wasn't very easy. Dammarie was more used to the ice and they could put the pressure in the Tornado's zone with their active forechecking. At the time 11.18, it was Dammarie indeed, who started scoring.

Three minutes before the end of the period Teemu Hinkula won a battle in the corner, gave the puck to Marcus Eriksson who used his well known wrister and sent the puck to the top corner. Dammarie's revenge didn't take too long. Already in the next shift they managed to score and teams went to the intermission 2-1 on the scoreboard for the home team.

For the second period the ice was made. Tornado took advantage of it and scored three goals in 8 minutes. The goals were scored by Captain Scheier, Vesa Hirvonen and Ossi Uotila and suddenly Tornado had a 4-2 lead. This was enough for Dammarie's goalie and he decided to give space for their back up goalkeeper.Dammarie kept fighting and 2 minutes before the end of the second period they scored and were only one goal behind Tornado. In the last shift of the period Colm Cannon's line managed to put the pressure in Dammarie's zone and only one second before the horn, Quentin Wilhelm sent the puck to the net from a small angle and luckily the puck found its way between goalies legs into the net. 5-3 to Tornado after 40 minutes.Dammarie came to the third period with a very good spirit and they managed to keep the puck in their offensive zone. Hard work paid off and after 12 minutes of the period they had tied the game.But Tornado didn't give up. Already in the next shift Colm Cannon had the puck in the corner, he passed it to Teemu Hinkula, who's onetimer found its way into the net. Already in the next shift, Henri Öörni had a breakaway, the goalie saved the puck but luckily for Tornado, Dammarie's defender dove and while sliding on the ice, he pushed the goalie with the puck into the net.Dammarie kept fighting but in the end, two minutes before the end, Colm Cannon had a breakaway and he lifted the puck to top corner with a backhand. This broke Dammarie's spine and in the end they only took frustrated penalties.It was a very important win for Tornado. Not only because they climbed to the 3rd spot in the standings, 3 points behind Dammarie but it was also important mentally. 8 goals and 8 different scorers shows that this was a win by the whole team. Despite the many goals, Gilles Mangen showed some good moves in the net and kept the team into the game when needed it most (including by stopping a penalty shot). Also many players sacrified themselves by blocking shot. For example, our young warrior, Niklas Meijer took one shot with his wrist. It would be interesting to see how the hand will look like the next morning.Tornado has now guaranteed its spot in the playoffs. There are three games left in the regular season, Dijon and ACBB at home and Champigny away. By winning all of them, Tornado will have a good chance to reach the second spot which would guarantee a spot to the second play off round.

Next game will be played already next Saturday and it will be in Kockelscheuer against Dijon. Spring is coming and it means that the hockey season is getting more and more interesting. Join the ride! #biggertogether.