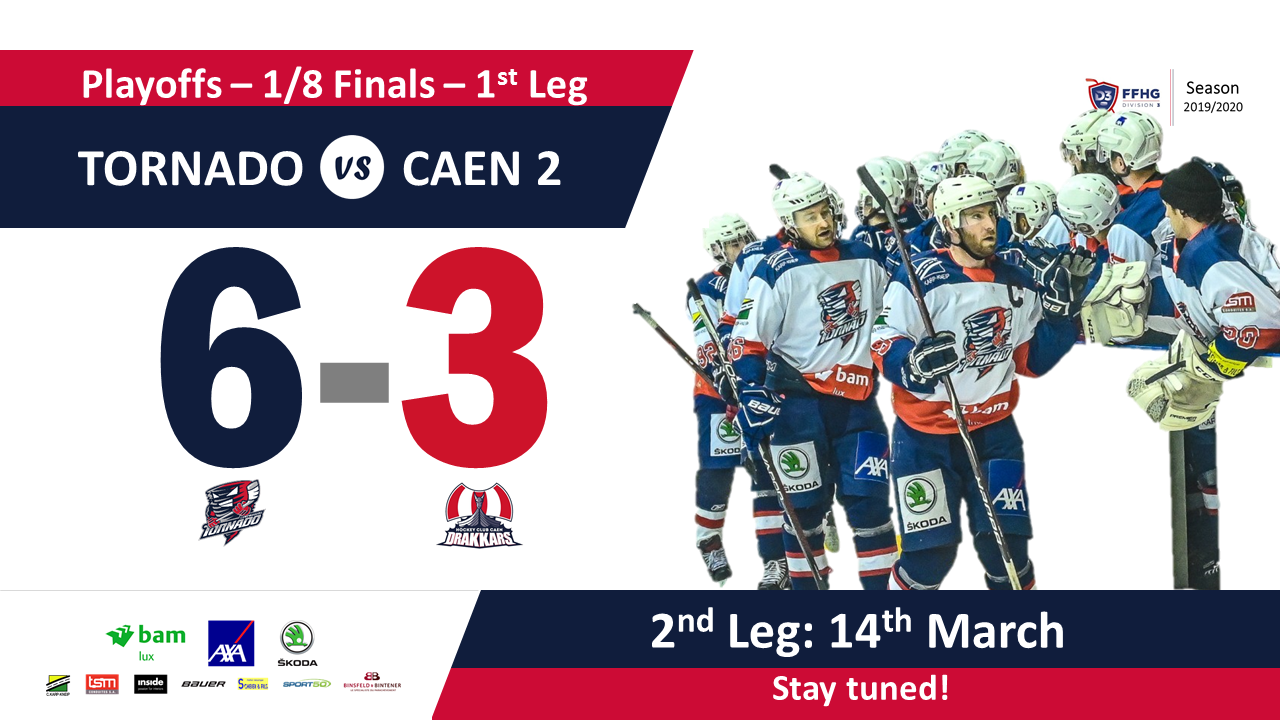 Tornado took a lead in the series

After a short preparation, the 2nd round of the playoffs in the French 3rd division started already on Saturday when a very experienced Caen, the winner of group A, visited Kockelscheuer. In the game Tornado took an important victory and will travel to Caen next Saturday with a 6-3 lead.

Despite Caen’s good puck possession in the beginning, Tornado had a very strong first period. The team has been practicing power play a lot lately and on Saturday it worked well. The first goal was seen after 9 minutes of play when Colm Cannon scored the game opener. A few minutes later, Caen got the puck after a lucky bounce in the neutral zone and managed to tie the game. At the end of the period Tornado scored two goals, by Shorty Müller and Vlad Shelest, and the score was 3-1 after 20 minutes. 2nd period was even In the beginning of the period Tornado’s first line made a beautiful tic tac toe goal on power play when Cannon was fed by Marcus Eriksson’s lateral pass. Caen kept fighting hard and one minute before the end of the period Pierre Bennett deflected a shot and scored the 2nd goal for Caen. 4-2 on the scoreboard after 40 minutes.

A goal in the end of a period often gives momentum to the scoring team and that’s what it looked like for Caen as well. After two minutes of play in the third period, Caen managed to score, and the game was suddenly 4-3. The excitement level increased few steps at this point.

Even though it was a game between two experienced team, it was 17 years old Vlad Shelest who took the lead in the game. After 10 minutes of play Vlad showed why his wrister is well known by the scouts everywhere as he sent a laser shot to the top right corner.

This playoff series is about overall score, so every goal is important. That’s why both teams needed to keep pushing until the end and luckily it was Tornado who managed to score when Matias Mäenpää put the puck into the net on power play. The final score after the 1st game is 6-3. Super exciting second game ahead The team will meet in the second game already next Saturday in Caen. A 3-goals lead might feel safe but Tornados has enough experience of how easy it is to lose in the playoffs. Let’s see if the team has learned from the past seasons and if there will be one more home game this season in the magical third round of playoffs. #BIGGERTOGETHER