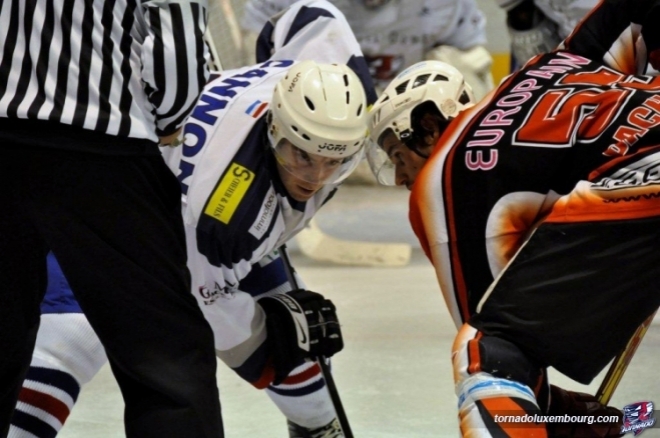 Again no points for Tornado this weekend. Coach Gallo's team traveled to its furthest destination of the regular season to face Besançon. Despite missing core players Linster, Schons, Biver, Scheier und Dequidt, the team was optimistic and expected a win.

A confident start allowed Tornado to take the lead at the 12' mark when this season's young Canadian addition Matt Maud and Czech regular Toni Jakubse opened a 2-0 lead for the guest team. Besançon managed to reduce the lead at the 14' mark, but Maud scored his second of the game before the end of the period and Tornado enjoyed a two-goal advantage in the first intermission. But then bad luck struck Tornado as one of the referees injured his ankle at the end of the first period and got replaced by the second goalie of the home team Besançon. The result was immediate as Tornado unfairly got assessed a number of misconduct penalties and saw its optimism and momentum shifting in the wrong direction.Besancon reduced the lead to 2-3 and then scored the equalizer against a completely stunned Tornado team. Backes gave Tornado the lead again just a minute later and Tornado, despite playing shorthanded for most of the period, was still in control of the game. Besançon took advantage of yet another inexplicable Tornado penalty to score the equalizer just 5 seconds into the powerplay. This ended the second period.

But Tornado was not willing to give up and wanted to beat the odds (and the referee-strengthened Besançon team) and one minute into the final period, Frederik Hellander tallied to put Tornado again up on the scoreboard. But as in period 2, Tornado played shorthanded for long stretches and Besançon accepted the welcome windfall of unfairness from the referees to tie the game at 53'.

Besançon scored the totally undeserved game winning goal just seconds later when a rebound got past an impeccable Philippe Lepage in the Tornado net.

Tornado loses this unbelievable game in front of a 500 people home crowd and finds itself relegated to the 5th position in the championship.

Tornado is hosting Chalons this coming Saturday and hopes to rebound from this unfair and incredible loss.