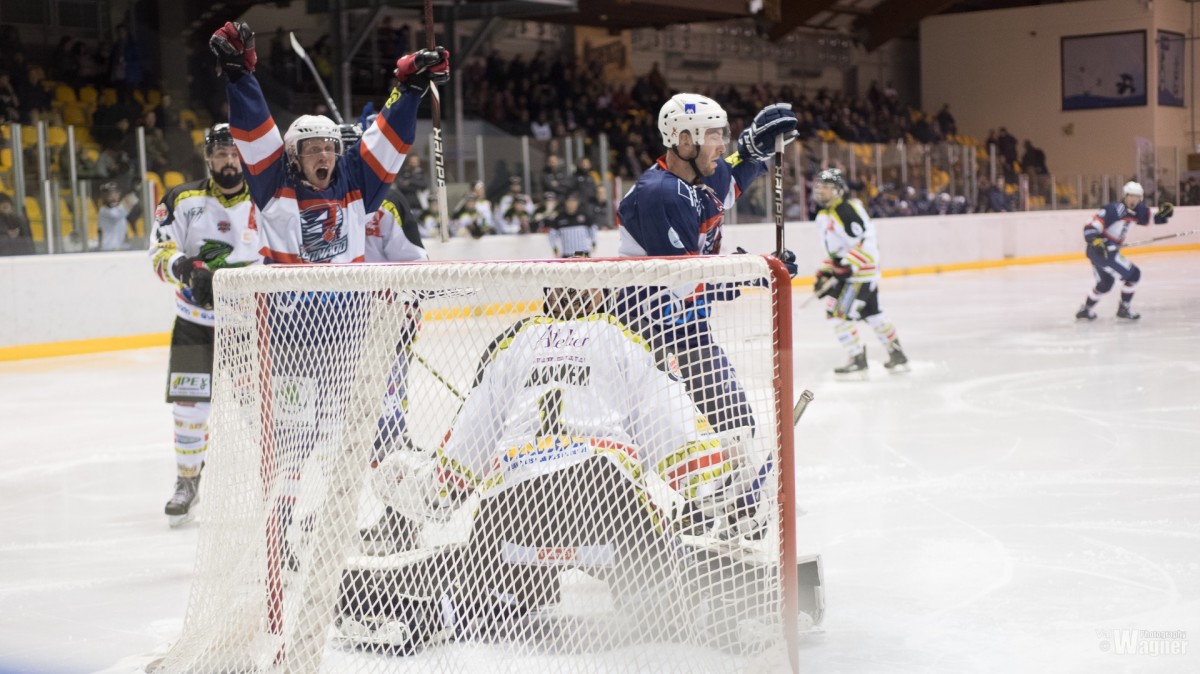 Hattrick from Shorty Müller secured Tornado’s spot to the 2nd round!

Luxembourgish ice hockey is BOOMING! A successful Lux derby, last weekend full house in Beaufort and now almost full stands in Kockelscheuer. Most importantly, there is not going to be an end to it yet as our Tornados took the spot in the 2nd round of the playoffs by beating Krokos of Nîmes with 6-2 in the second game of the first playoffs round.A two goals win was needed and that’s what Tornados started to chase with determination. Tornado’s first line showed from the beginning that they will take care that team will have chance to win the game. At time 6:50, the hero of the game, Shorty Müller scored the game opener by deflecting a shot frrom Vesa Hirvonen.Unluckily already in the next shift Nîmes managed to tie the game and the 1st period ended with exciting 1-1 score on the scoreboard.In the second period Tornado’s first line kept dominating. The old hockey saying goes “Throw the puck on the net and good things happens”. Colm Cannon has this slogan in his DNA and this time it paid off. After 4 minutes of play Colm sent a very innocent shot towards the Nîmes’ net from behind the blue line. Surprisingly the puck found its was into the net through the stunned goalie of Nîmes. Now Tornado had a one goal lead what would take the game to the overtime.It took only three more minutes when Shorty Müller was doing what he does best, scoring from Henri Öörni’s passes and suddenly Tornado had the needed two goal lead.In the second period Tornado was controlling the game. Though half away through the period Tornados messed up the breakout on powerplay and Nîmes managed to score the 2-3 goal shorthanded.

But no worries, just before the end of the period Marcus Eriksson was face to face with the goalie and he sent the puck to the top corner. Important goal before the intermission.

During the break it was discussed that the next goal would break Nîmes’ spine. Vesa Hirvonen decided to execute this thought by scoring very the important 5-2 goal just 25 seconds after the face off.

In the end of the period Shorty Müller sealed his hattrick and it was time to celebrate.

It was an amazing hockey evening, lots of people came to the game, many new faces on the stands, the support of the figure skaters and juniors before the game, Mike Puckers dominating with the mic, Liam McEvoy providing the players’ thought in social media etc. Lux hockey is in a good flow at the moment and the best part is that it’s not going to end yet. Now Tornado will go the second round and have another visitor from far away as Toulon managed to come from three goal behind and beat Dammarie 10-5.

The game dates are not sure yet but there will be two games in next three weeks. We will inform you as soon as we know the dates.

People, this is the best time of the hockey season so let’s get #biggertogether!